How To Cook A Roast 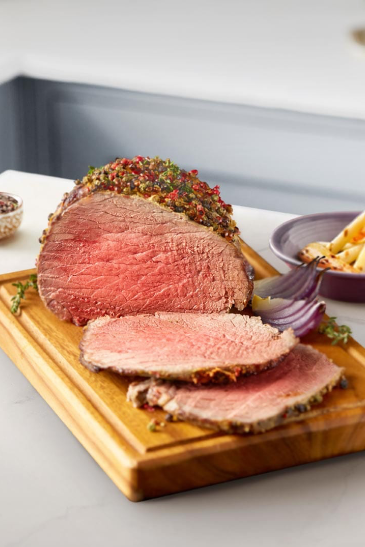 Cooking a roast is a great option as it allows you time to prepare other dishes, vegetables, and any sauces while the meat is happily cooking. It’s also always sure to be a crowd pleaser! Whether you want to find out how to cook roast beef, lamb or pork, the first step is to buy a quality piece of meat from your local Scotch Butchers.

The current recommended daily intake of red meat is around 70g cooked weight per person. Even at lower temperature cooking, around 20% shrinkage will occur, so allow approximately 120g raw meat per person if the joint is boneless, and approximately 225g if the meat is on the bone. When calculating how much to buy, always add a little extra – a larger piece of meat will cook better and cold roast beef can make any number of meals for later in the week.

The following simple instructions use a lower roasting temperature to minimise the loss of moisture and shrinkage caused by cooking at higher temperatures.

Allow the meat to come to room temperature and ensure that it is completely dry before cooking. Preheat the oven to 180°C (or turn down to 180°C if the meat has been browned in a very hot oven, see following).

Brown the meat, either in a hot pan with a little vegetable oil or in a very hot oven at 220°C for 15 minutes. Once the meat has been browned, place it uncovered on a wire rack in a shallow roasting tin, ensuring that any fat is on the top. Continue to cook at 180°C until it has reached the required internal temperature, or level of ‘doneness’.

The formula for roasting meat is based on minutes spent in the oven per kilo of meat. Weigh the piece of meat before cooking and calculate the cooking time. If you are roasting a stuffed joint, you should weigh it after stuffing. Use a skewer to test the colour of the juice to indicate what stage the meat is at: red (rare), pink (medium) or clear (well done).

For less tender cuts, use the pot roasting method.

Brown the piece of meat as for the traditional roasting method and place in a deep casserole/braising dish with vegetables, herbs and seasoning to add extra flavour. Root vegetables, such as onion, carrot, turnip, celeriac, leek, celery, and potato are perfect accompaniments and should be roughly cut into large chunks that will not break up during cooking.

Mushrooms, peppers, and tomatoes are also great but should be added when there is still 40 minutes of cooking time remaining.

Allow approximately 450g vegetables and 150ml liquid, which can be water, stock, wine, cider, beer or a mixture for a 1.25kg joint. Cover tightly and cook slowly.

After the roast comes out the oven, cover it with foil (shiny side down) and allow it to rest for at least 10-15 minutes. This allows the meat to relax so the juices become evenly distributed throughout, making it more succulent and easier to carve.

There are two methods of carving boned and rolled joints. Either lay the piece on its side and then cut slices from it almost as if it were a loaf of bread.

We hope this sets you up nicely for your next roast. Make sure to share your creations with us at @thescotchkitchen.